Gandhi was a big believer in treasuring health.

Gandhi was an independent thinker. He looked at all ideas afresh. He believed that modern medicine is the bane of man when used to perpetuate bad habits. Unpleasant reactions to food, drink or bad habits are our body’s way of telling us to form better habits but instead we resort to medicine to mask the symptoms and inculcates faith in our body’s own self-healing mechanisms. 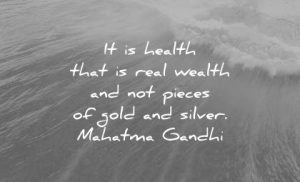 Gandhi’s book on “Keys to Health” is one of the most popular than all of his writings which sheds light on importance of his ideas regarding health.  Below are his views taken from the book.

It is necessary to understand the meaning of the word health, which means body ease. A healthy man is a person whose body is free from disease and can carry on his normal activities without fatigue. Gandhi states that it is necessary to have knowledge about one’s body which most of them are ignorant about. He states that human body is composed of five elements which ancient philosophers have described as Earth, Water, Vacancy, Light and Air. He further states that good working of the human body depends upon the harmonious activity of the various component parts.

Elements as Part of Health

The first element Air without which we can’t live is surrounded us on all sides. Gandhi says that those who do not know how to breathe should take breathing exercises, further he gives the importance of cleaning the nostrils and the importance of sleeping under open sky.

The second element Water which is basic necessity of life should be pure and it’s the municipality’s responsibility to provide clean water and to maintain the sewage and drainage system. Hydrotherapy is also a well known therapy especially “Kuhne’s book on Nature Cure”.

The third element Earth which can be used as nature’s way to treat ailments i.e., mud poultices to cue scorpion sting, constipation ordinary boils etc. The other element light which we get from sun has many uses such as sunbaths.

The last element which can be also termed as Akash (ETHER) which helps to maintain and regain health.

Gandhi states that observing Brahmacharya lead to a healthy life. It is the mode of life which leads to realization of God. The realization is through practicing self-restraint of senses. He further says that if there is determination to control the thought and the action, victory is sure to follow.

The next point to focus on is: what is the use of the human body? Gandhi replies to it that, “everything in the world can be used and abused and it applies to our body too. We abuse it when we use it for selfish purposes, in order to harm are body. It is put to right use if we exercise self-restraint and dedicate ourselves to the service of the whole world.

Nutrition According to Gandhi

Further Gandhi divides food into three categories: vegetarian, flesh and mixed. According to him, vegetarian is best among all followed by mixed. Gandhi states the importance of milk, cereals, pulses, fruits, vegetables, fats and the proportion in which it should be used. In his opinion there are definite drawbacks in taking meat as in order to get meat we have to kill. Regarding condiments Gandhi says, that body requires certain salts which mostly occur naturally in various food stuffs and from his personal experiments of fifty years is that there is no need for such condiments to keep body healthy except is necessary for medicinal purposes.

Regarding sweets he is of the opinion that jaggery is the best among all and fried food should ne avoided. Moving forward let us consider how often and how much to eat ? Here Gandhi replies, “Food should be taken as a matter of duty even as a medicine to sustain the body, never for the satisfaction of palate. There should be self-control as such habits of elders influence children to some extent.” Then Gandhi focuses on how often should one eat? So the general rule is to take three meals.

Further Gandhi states that, “Drugs and drink are the two arms of the devil with which he strikes his helpless slaves into stupefaction and intoxication.” Gandhi gave various reasons for drinking such as imitating the rich people, addiction formed during medicinal use, to get assistance form whites during British rule, environment and social disorganization, easy availability of it, etc. The effects are not only financial loss but also moral loss.

Another vice was opium abuse which started during British as they commercialized it in India. He also states the evils of smoking cigarettes which is both among young and old. Earlier smoking was limited and was done in privacy but under the influence of Englishmen it became widespread in use. Gandhi gave various ill-effects of smoking like impaired eye-sight, problem in digestion, etc. The most humiliating thing related to smoking was during Gandhian period certain company sold cigarettes bearing the name of “Mahatma Gandhi” cigarettes because tobacco use was opposed by Gandhi. Gandhi further implied that, ‘if every smoker stopped the dirty habit of making his mouth a chimney to foul breath by making a present of his savings to some national cause, he would benefit both himself and the nation.